Blog » How To Write A Hypothesis Guide And Detailed Instructions 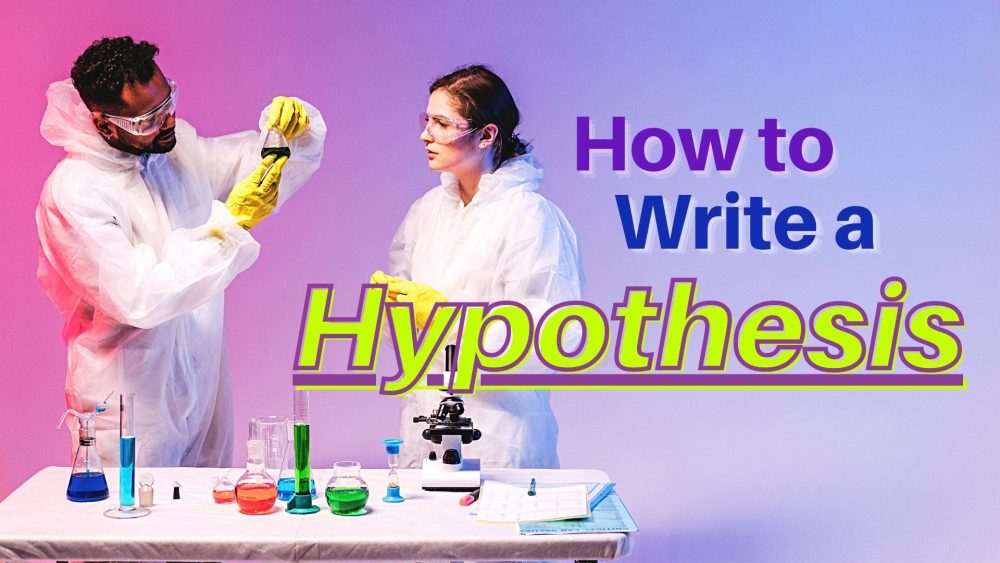 Whether you’re studying for a college degree, MBA, or Ph.D., developing a hypothesis for your research is mandatory. You must know how to write a good hypothesis to impress your professors. Now, how should a hypothesis be written?

This is where some students get confused and exhausted. You already know that you’re to formulate a hypothesis around something testable. But you don’t know how to create hypotheses based on previous observations that you would later explain in your paper or journal.

In this article, you’ll learn what a hypothesis is, how to make a hypothesis, examples of how to write hypothesis statement, and how to go about yours.

What Is A Hypothesis?

A hypothesis is a statement that is not proven, and it’s an assumption that you’ll base your research on. They must be testable: they must have answers that can be checked with experiments and evidence.

The theory around your hypothesis becomes valid when it’s proven to be true through experiments. Scientists have rules for writing that make their chemistry, physics, and biology research reproducible.

An essential part is that they must understand the experiments of others so that they can build on them and improve them. These rules define how scientists write about science. This rule applies to hypotheses, too.

Why Do You Need A Hypothesis?

Writing a good hypothesis is a key part of any scientific exploration. It allows a broad and open-ended question that compels you to investigate. There are many other reasons, including:

Now that you know why you need to formulate a testable hypothesis, learn how to write a research hypothesis with tangible examples.

How To Write A Hypothesis

Before you start your experiments in the lab, it’s important to take some time to think about what you’re trying to achieve. After all, you can’t know your research destination until you plan it beforehand. This is why mastering how to state a hypothesis gives room for healthy predictions. Here’s how you formulate hypothesis:

There are numerous examples of a hypothesis statement you can take a clue from. A scientific hypothesis examines two variables that need evidence-based research to be considered valid. For example:

“If I increase the amount of water applied to a plant garden, then it will make it grow faster.”

You then need to research the topic in detail and design an experiment before you can write your report. The first step is to decide what you’re going to measure, how you’ll measure it, and how many times you’ll do this so that it’s accurate.

Once you’ve measured your experiment, interpreting the results can be challenging. You should look at graphs or charts of your data to see if any patterns or trends might indicate a cause-and-effect relationship between two things (like applying more water to the plant garden and faster growth).

After looking at the results of your experiment and deciding whether or not they support your original hypothesis, use this new knowledge in your conclusion. Write up something like:

“Based on my findings, it’s clear that applying more water to any plant garden would make the plant garden grow faster and greener.”

Then, write an introduction section where you can explain why this project interests/matters/is relevant to your reader. At this point, your hypothesis is no longer an educated guess. It started as one (with the observation or thoughts/idea) and ended as verifiable.

Format For Hypothesis: How Should A Hypothesis Be Written?

The usual format of a hypothesis is If – (then) – because.

Because we have the idea that if a hypothesis is formatted as an if-then statement, it’s clear what the hypothesis is about. This can be helpful for your readers and yourself if you ever need to come back and look at your work.

So, now that you know how to format it correctly (and why) let’s look at some hypothesis examples.

“If snow falls, then I’ll catch a cold when I get outside because cold can be a result of heavy snow.”

“If anyone in my family eats cake, then we will feel sick because the cake contains ingredients we are allergic to.”

“Some grasses never grow because they’re stumped every day.”

All these show that two variables must come together in the sentence. The variables must also be a probability the research attempts to solve to make them valid statements.

How To Know Your Hypothesis Is Good

Now that you know how to create a hypothesis, you need to know if it’s good through these pointers:

What Should You Do If Your Hypothesis Is Incorrect?

You need to reformulate your thesis if it’s incorrect. You may have to reevaluate the problem or look at it differently. It’s also possible that you need to test your hypothesis with a different method of experimentation.

Here are some ideas from the best scientific thesis writing help experts:

Document how you made your product and recorded any necessary changes along the way. This will help you know what works and doesn’t so that you’ll make changes to the whole idea.

We offer some of the best writing helpers online, with fast with turnovers. Our writers create the best hypothesis scenario with the possibility to ace any experiment at a cheap price. They will offer writing help if you need these professionals to help write a good hypothesis for you. After all, you need to complete your degrees stronger than you started. A great paper by professionals can seal that deal, and our master thesis writing service is here to help.